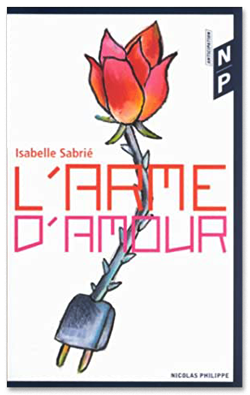 In a near future, a conspiracy of several sides is organized on Earth, supported by entities of the “fourth species”, hybrids of silicone and flesh dominating the web. Invisible to the human eyes, omnipresent and obsessed by the idea of violence, these creatures envisage eliminating the humans considered dangerous and unable of evolution. One of them seems to wish to betray this conspiracy united in a parliament, forming an alliance with five humans : a Nobel Prize specialized in neurobiology and electromagnetism, an industrial, a journalist, an actor and a multimillionaire scriptwriter. They try to imagine actions of resistance without being discovered by the creatures. The game looks lost. But the love weapon appears, which is able to make everything fall over… A story full of plot shots which finds strange echoes in the news sometimes submerged by new technologies.

The heroes present the non-violence by force, a neuro-force which surpasses every other existent weapon since it controls the human brains, and ask for a world democratic control of it, in presence of their adversaries who try to neutralize them.